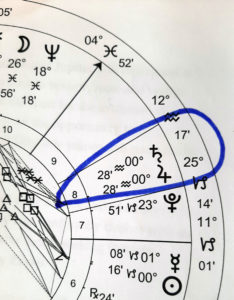 On the 21st December 2020, the winter solstice, Saturn and Jupiter will be aligned at zero degree Aquarius. This rare cosmic event signals a time to review, reset and restart your personal life journey. It also heralds a fork in the road for the evolution of human consciousness: a crucial time when we all have the opportunity to re-evaluate what we truly value and the kind of society we want to be in. Temporal values and Ultimate values will come under individual and collective appraisal and re-appraisal.

Astrologically, Saturn, the Lord of Time, of karma, of duty of care and of authority is the co-ruler of Aquarius and a supporter of austerity and conformity, is clashing with its polar opposite, Jupiter. Jupiter is the ruler of expansive Truth-seeking freedom-loving Sagittarius, and co-ruler of altruistic, mystical visionary Pisces.

The chart for 4.30pm GMT, time of the exact conjunction, also shows the Sun (symbol of the sovereign self and, collectively, the monarch and its agents/government) is in a square (confrontational) aspect with the Moon (symbol of the personality and, collectively, of the general public). The Moon is also conjunct Neptune, the planet associated with enlightenment and illumination or, conversely, with delusions and deception. Assertive and war-liking Mars is square Pluto, the ruler of the Underworld – the pre-conscious and primitive cellular self. Pluto is associated with personal transformation and, collectively, the destruction of outworn structures both physical and ideological. It may also be a portal to other dimensions and a gateway through which, at auspicious times, extra terrestrials can travel. In Kabbala, Pluto corresponds with Daath, the sephiroth that is both there and not there.

What does all that mean?

One thing we can all agree on, whether you are an astrologer or not, is the years ahead will be nothing like the ones just past. But the distant past can shed light. The last time Saturn and Jupiter were so closely conjunct in Aquarius (an Air sign) was 1405. The main event in England at that time was the Northern Rising against the King (Shakespeare sets the plot in King Henry IV, Part 2). It is worth saying a little about that. The Archbishop of York and the Earl of Northumberland raised an 8,000 strong army of Tykes to do battle against the King’s forces (it is likely that the Yorkshire folk were resisting the seizure of their lands, wealth, and way of life). They assembled at Shipton but, trying to avoid a bloody battle the Archbishop parleyed with the Royalist leaders and obtained assurances that their demands would be met. With that they disbanded. But they had been deceived. When the army had dispersed the Archbishop and Earl were arrested by the Royalists and taken to Pontefract dungeon where they were locked down to await trial for treason. Their rights under Magna Carta were not respected and following a show trial they were beheaded in York on 8th June. The Pope excommunicated all those who took part in the show trial. However, the Archbishop of Canterbury on receipt of the Pope’s decree prohibited its publication so the news never reached the people. Curiously, the previous Saturn/Jupiter conjunction in Aquarius was 1226, significantly only a few months after the final version of Magna Carta was nailed to every church door in England.

It should be said, a very brief conjunction of Saturn and Jupiter in an Air sign (Libra) occurred in 1981. Perhaps it gave us a foretaste of the future; the word Internet first came to public consciousness: Microsoft released the first PC: Lady Diana married Prince Charles: there were riots in UK cities: Solidarity arose in Poland inspiring a general strike: the AIDS virus was identified.

There are some historical parallels worth pondering before choosing the path you will take and the future you will help create. Government enforced lockdowns, restrictions on movement, and curtailment of free speech not only cause stress, anger and anxiety damaging the immune system, they also lower the vibration, limiting creativity and intuition. The very qualities you require to fulfil your destiny, and the more souls who fulfil their life purpose, the better it is for all.