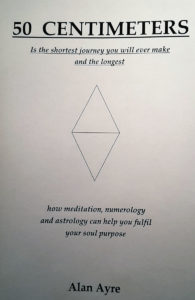 50 CENTIMETERS
is the shortest journey you will ever make, and the longest
(publication 2020, by Matador)

“Meditation is so real, we must become real ourselves
to practice it” – White Eagle

This book was inspired by a series of meditations and transmissions concerning self actualisation. In the first part of the book the four fundamental barriers to self realisation are considered. Part two considers how meditation, numerology and astrology can help bridge the divide between the outer personality and the inner, higher self. (Contact Alan directly, if interested in purchasing) 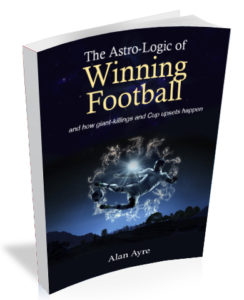 Published in 2015, Astro-Logic has become the textbook standard for progressive coaches and players interested in furthering their careers. This book explains in detail how winning teams are constructed astrologically. It also clears up some footballing ‘superstitions’ such as, why players believe they have lucky and unlucky grounds. Buy on Amazon 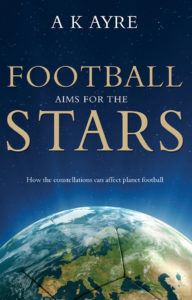 Football Aims for the Stars
(published in 2010, by Matador)

“There are many paths to success, you have to do what fits your personality” – Marcello Lippi, Italy

Real success in football, as in life, comes when you understand yourself and have the courage to be true to your Self. However, because football is a team sport it is more difficult to fulfil your potential. In this book the 12 basic player types are considered with hundreds of examples to help players and coaches understand themselves and each other. Buy from Amazon