Whether we are aware of it or not, we are all on a spiritual journey. And like all journeys they take time and occupy space. All spaces have their own particular energies and if you know yourself and know the character of a place, you know whether it will support or hinder you on your Life Path. If you are a footballer, with a relatively short playing career, it’s vital to know which clubs are right for you. The wrong choice can throw your career off track, if not end it.

‘Only Pogba is to blame for his failure at United,’ wrote Jim White for the Telegraph, after the World Cup–winning star came and went from Juventus (£86M fee) having been released for zero at the end of the 2021-22 season by Manchester United. No Jim! Paul isn’t solely to blame. What about United’s Sports Scientists, the Performance Staff, the manager, and didn’t the owners think to ask Alex Ferguson why Paul underperformed the first time United signed him? Nevertheless, it was a costly mistake for both United and Paul.

The astrological reason mystical Piscean Pogba played better in Turin (Juventus’ home city) was his astro-locality 10th house Jupiter (ruler of Pisces and bringer of fame) crossing close by Lo Stadium and the Holy Shroud. By contrast, and for clarification we will consider Eric Cantona’s acclaim at Manchester United and Leeds and why he saw red at Crystal Palace. After reaching a pinnacle at Scotland’s Granite city it was Ferguson’s destiny to travel the rest of the Way to the top in Manchester. David Beckham did very well there too, but flopped in Madrid. Why did golden boot-winner Michael Owen impress everywhere except Newcastle? Whilst Mario Balotelli looked a world-beater in Milan he is still a contender for ‘worst ever signing’ at Liverpool. Brian Clough took to Nottingham like a duck to water, but was a lamb to the slaughter in Leeds.

Eric Cantona was born in Marseille, but the football Fates summoned him to England. There are two sides to Eric ‘Gemini’ Cantona: Eric the Red Devil and the artist philosopher Cantona. His playing career took off in Leeds where the fans idolised him. His outstanding performances at Elland Road prompted Manchester United to move in. Why did his genius only emerge when he went to Leeds and then to Manchester? Eric’s Lunar nodes (life path/fate line) and his Moon (emotional connection with the people) crossed over the Pennines. His Mars in Taurus (the Bull) runs through London and it was at Palace where Cantona saw red, attacked a fan who was verbally abusing him, and was banned by the FA. 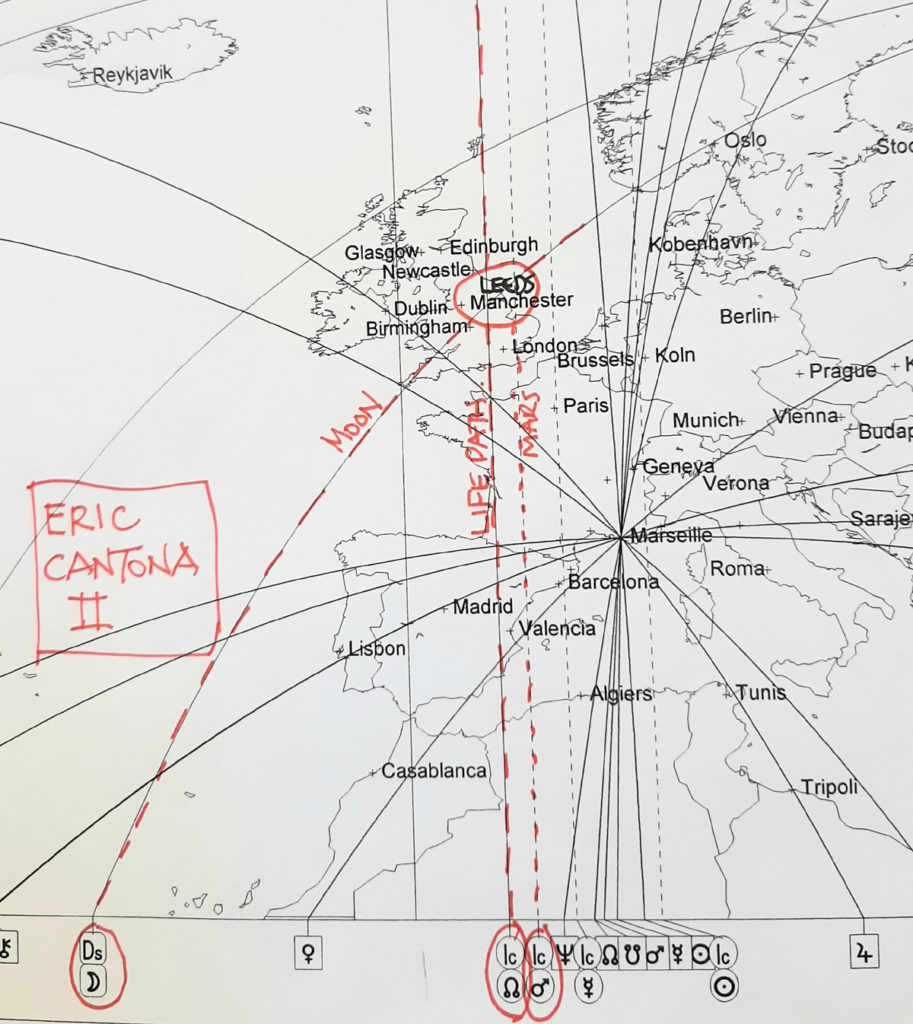 Alex Ferguson was born in Glasgow on the 31st December 1941 (Sun Capricorn, Mars Aries) making his name as a coach in Aberdeen where he won the European Super Cup. He went on to win the Super Cup again as well as numerous Premiership titles and the Champions League three times with Manchester United. The most memorable of which was in 1999 in the Camp Nou, Barcelona; United were losing 0-1 to Bayern Munich in ‘injury time’ when the Fates intervened and Ferguson’s two substitutes scored to make the result 2-1. 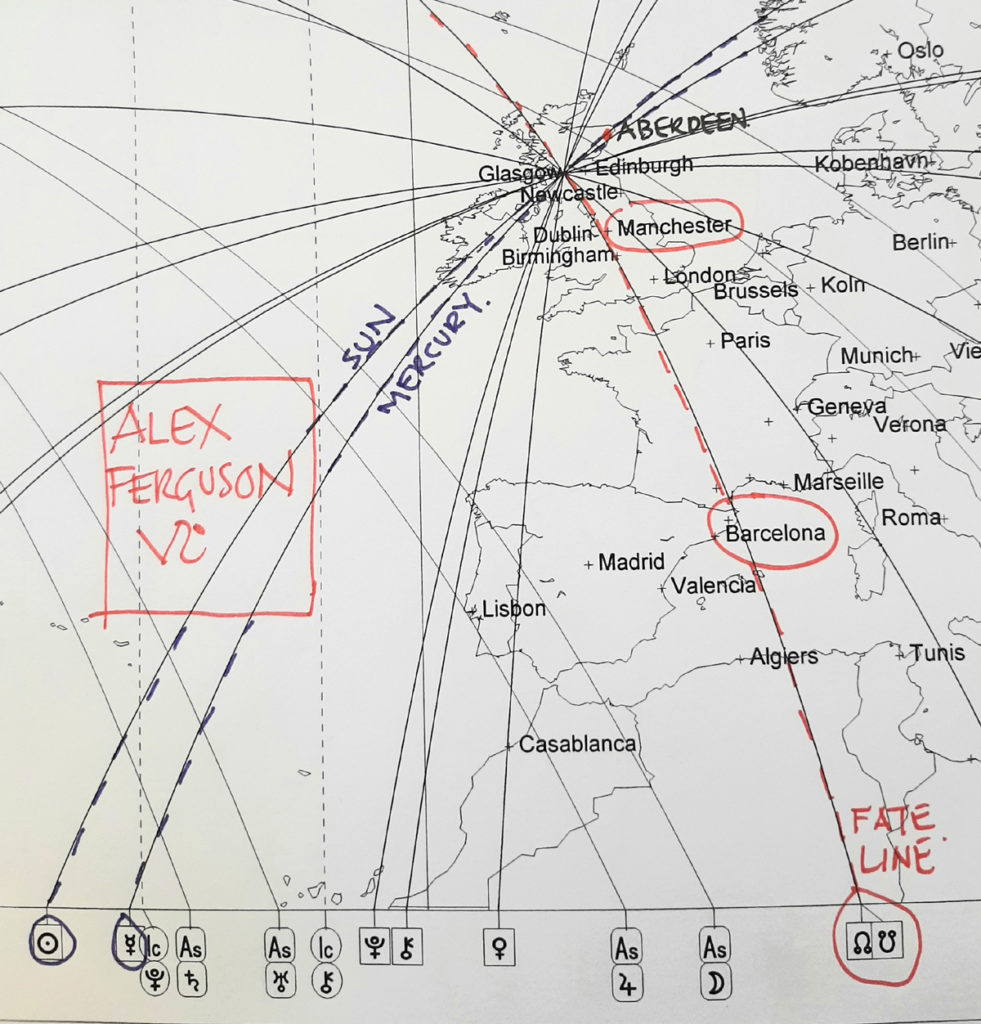 David Beckham was born 2nd May 1975 (Sun Taurus Mars Pisces) in London and followed his Mars line to the Theatre of Dreams (not quite, but Mars is his closest line to Manchester) and on through Los Angeles Galaxy, circling the globe to Milan and on to Paris St Germain. Mars delivered many victories for David, wherever he went he was a winner, except in Madrid where his Saturn line (isolation and feeling the weight of the world) cast a long shadow over his career. It took three years for Becks to clear. 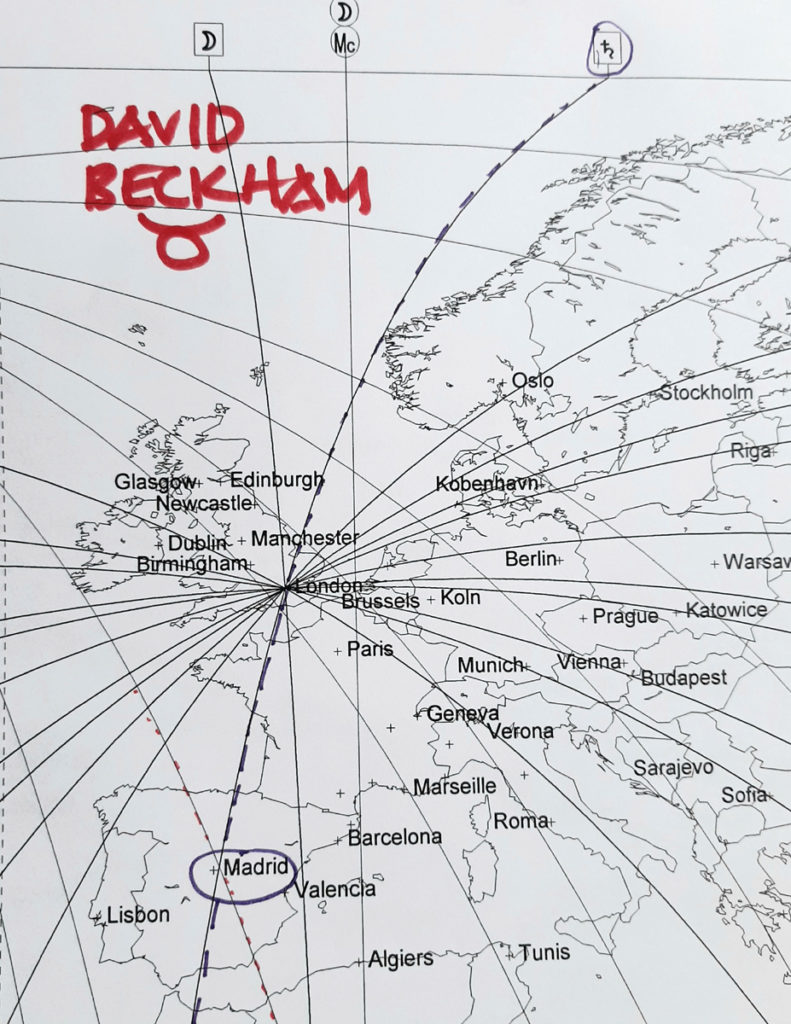 Michael Owen the half-man half-horse straight-shooting Sagittarian golden-boot winner, was born in Chester on the 14th December 1979. Owen enjoyed remarkable success at Liverpool and for England, but in 2005 Newcastle United broke their transfer record to sign the superstar but, within days of joining the Magpies, Owen suffered a thigh injury. A few months later he broke a bone in his foot, then complications set in, then he suffered a serious knee injury which took ages to heal!?

Michael’s Chiron line goes through Newcastle – in mythology Chiron is known as the Wounded Healer, in football Chiron and injuries seem to go together. 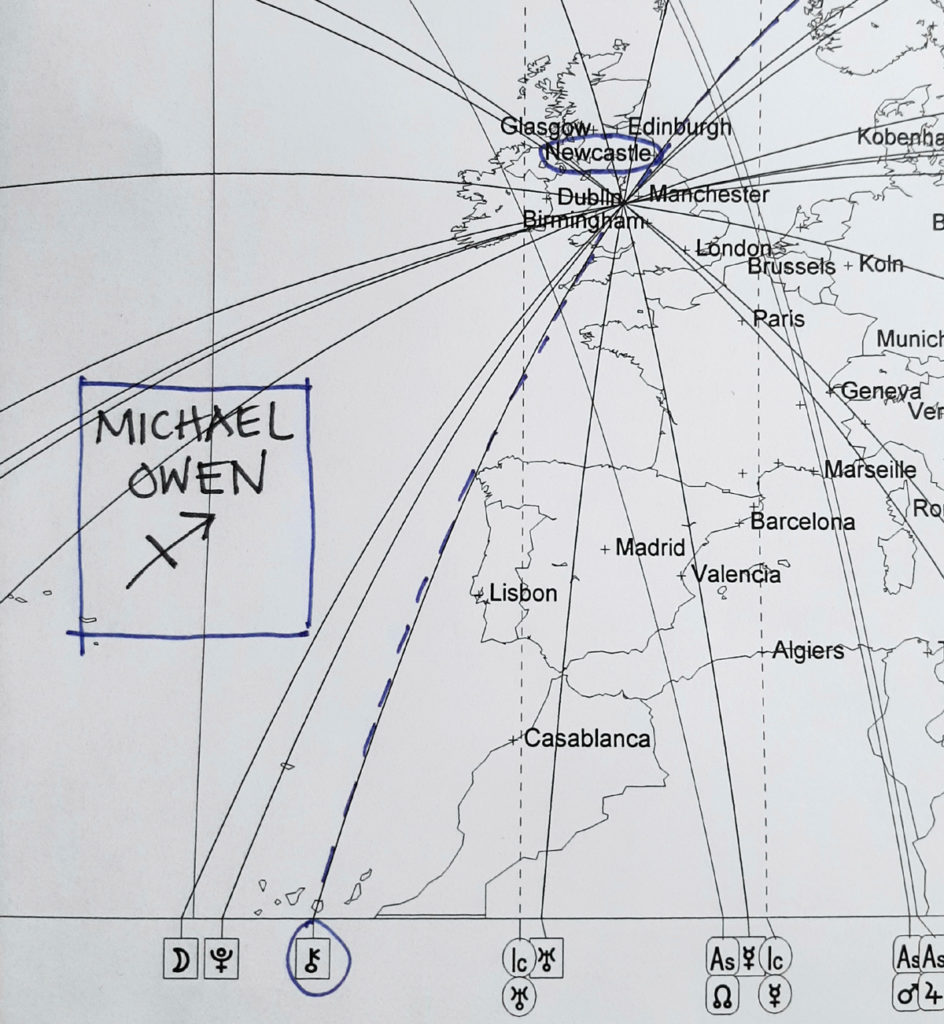 Mario Balotelli was born on the 12th August 1990 (Sun Leo Mars Taurus) in Palermo, Italy. This Italy international and star performer at AC and Inter Milan (Mars line) and Nice (Jupiter line) struggled to produce his best form at Liverpool, where he suffered much reputational damage. Both Saturn and Chiron lines besiege Anfield in Mario’s astro-locality maps. 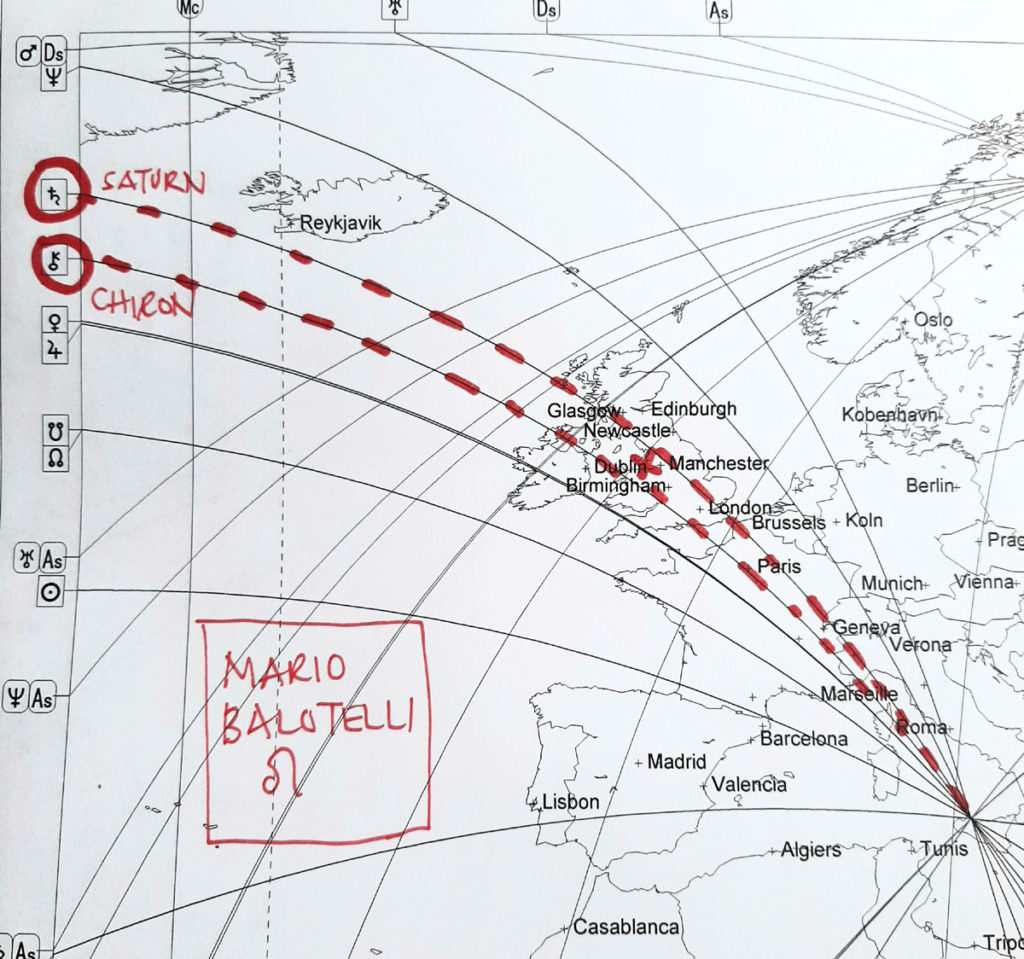 Brian Clough was born on 21st March 1935 (Sun Aries Mars Libra) in Middlesbrough, Yorkshire. Clough’s managerial record is comparable with the very best. He transformed Derby County taking them to the semi-final of the European Cup and then worked miracles to win the European Cup twice with Nottingham Forest, but his time in Leeds was a disaster.

Clough’s great successes were in Nottingham, on his Sun line. Derby resonated with him to some degree; after all, their nickname is the Rams (Aries) and the club sits between his Sun and Neptune lines. As mentioned above, the Sun is where you shine but in this case not too much because Neptune was undermining him (the club directors felt he was underhand in his transfer dealings). Neptune is a mysterious influence, supportive of high ideals, illumination and sacrifice for the greater good. On the other hand there can be self delusion and deception. Therefore, it usually brings difficulties for those pursuing careers for personal gain in competitive situations. Interestingly, Brian perceived Derby’s defeat to Juventus in the semi-final as a result of bribery and corruption. In Leeds, Clough found himself squeezed between Neptune and Saturn lines (Saturn not only brings isolation and challenges; in myth he is the Grim Reaper and Teacher of common sense and Universal law – ‘do unto others as you would have them do unto you’.) In Clough’s case he did not see the reality of his situation in Leeds; he miss spoke, he was arrogant and demeaned the very people he needed. He was a leader with no followers. He was humiliated and then sacked after a symbolic 44 days (4+4 = 8 = Saturn). 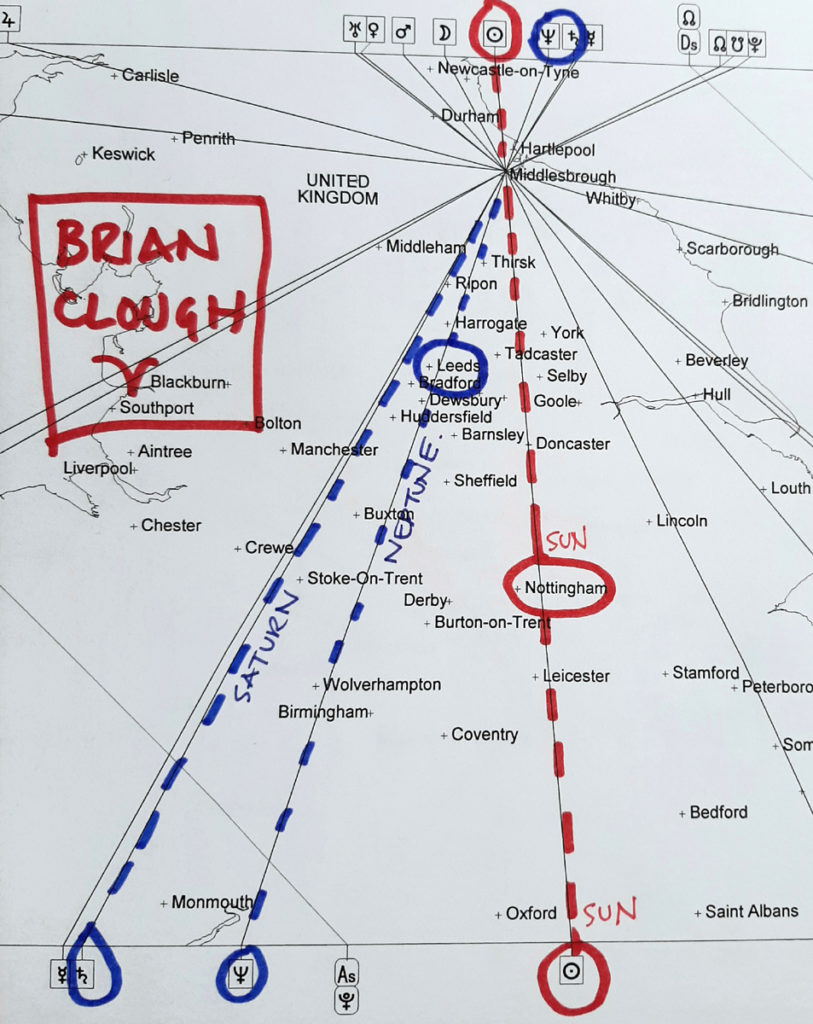