The astrological chart for The New Year 2020 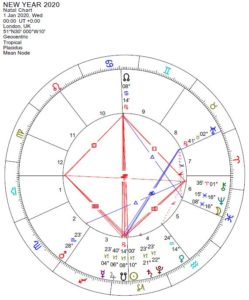 2020 provides the background frequency for the year ahead, according to the rule of Pythagoras the year resonates to the number 4 (2+0+2+0= 4). Its vibration affects us collectively and individually. Astrologically number 4 resonates with Uranus – the Awakener…to reality, and ruler of Aquarius.

The theme of 4
Physical plane: the practical root of all things manifest.

Earth: the four elements, the four seasons. In Native American mythology when the Great Spirit smoked his peace pipe he blew the smoke to the 4 corners of creation.

Plato taught that there are 4 states of mind. The lowest, and the one we are all born into, he compared to a prisoner in a cave who only sees the shadow of things projected onto the walls and because as yet he knows no better thinks they are real. From those thoughts he formulates beliefs (the second state). The third state of mind requires the ‘prisoner’ to develop logic and critical thinking. The highest state Plato called Intelligence; when through logic, intuition and imagination the mind is free of its ‘chains’ it perceives the cause behind the shadows/effects. The individual now has access to ultimate truths, is enlightened, and can discriminate between the real and illusory.

4th Ray of Beauty: according to Alice Bailey, Madam Blavatsky and other esotericists there are seven rays (life streams) proceeding from the One source. The 4th is called Beauty. It is the kind of beauty that comes through conflict (between the personality and higher self). When conflict has exhausted itself what is left is harmony.

Astrological Square: when the circle of the zodiac is divided by 4 a square aspect (90 degrees) is produced. This is called a ‘hard’ aspect because it poses a challenge to the personality. For example, if the subject has Moon (emotions/feelings) in Libra and Mercury (thinking) at a 90 degree angle from Libra (i.e. in either Cancer or Capricorn) the subject will have a conflict between their emotional reactions and thought processes. Without self-awareness they will have to face the conflict in the outer world.

Freemasonry Square: the freemason’s apron is a perfect square piece of cloth to signify that they are working to perfect the elements in their own nature.

4th Initiation: the highest initiation on the spiritual path is the 4th. The task for the aspirant is mastery over all the elements of the physical body, and practical service to life.

4 = URANUS: in astrological terms Uranus is the light bringer, awakening the personality to the reality of the higher self. It is the planet of Individuation and Utopia. However, because the personality has no intention of waking up and it is Uranus’ role to do just that he has a shocking reputation for upsetting any apple cart. In that sense expect 2020 to upset the political, economic, religious, and or social cart.

AQUARIUS: is co-ruled by traditional, conservative Saturn and radical revolutionary Uranus. The flavour of the year will be conflicted by Saturnian personalities harking back to an imagined golden past and Uranians embracing the emergent 4th Industrial Revolution (AI, robotics, nano-Space-tech) and looking forward to creating a Utopian future.

4 = 1930s: It can be instructive to look back to see the kind of future we should endeavour to avoid. The 1930s was the last decade to resonate to 4 (Uranus has a 84 year cycle). In 1935 Labour suffered its worst defeat, apart from their humiliation in 2019. Populism followed. In 1930 Keynesian economics was rolled out: low interest rates, money printing, massive infrastructure projects to spend money into the economy. Ditto 2020? There was an environmental catastrophe between 1930 and 1936 in America – 300 million tons of topsoil blew away from the mid west (the Dust Bowl) deepening the Great Depression. Alarm bells with current farming practices should be sounding by now: EU food wastage should be discouraged, innovation to clean up plastic pollution encouraged, low level radiation impacts should be understood, bee populations should be protected even in spite of demand for trendy foods.

Saturn arrives in Aquarius on the 23rd March and then Retrogrades on the 11th of May. Saturn moves direct again at the end of September and then finally stays in Aquarius from the 17th of December 2020 to the 7th of March 2023.

Jupiter remains in Capricorn until the end of this year, arriving in Aquarius on December 19th for the first time in 12 years. When expansive Jupiter’s energy combines with visionary Aquarius, the emphasis is on looking ahead, thinking big, and embracing all of humanity. Jupiter is the plant of opportunity and growth, and during his journey through progressive Aquarius, we will all be inspired to think in radical new ways and get people working together to create new possibilities for all.