Knowing your Life Path Number and Ruling Planet is self-empowering. What do I mean by self-empowering? Being authentic, knowing your self, and being true to your soul purpose. Then you cannot be manipulated or exploited. But it is not straightforward.

When we are born we appear to be one person but we are not, we are 2.
We are born into a personality, and unless it is awakened you may never know your higher, authentic Self.

According to NASA the universe is a digital hologram.
According to Isaac Newton God brought into existence a physical world governed by mathematical laws and numbers.

Consciousness is a frequency and all frequencies can be reduced to number. When you know your number you know where you fit in the Grand Plan. 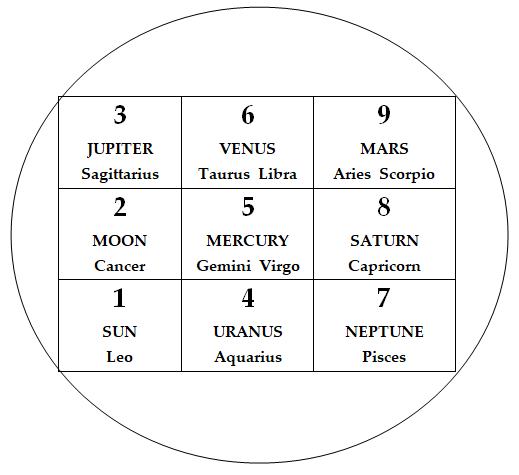 10 Completion, union of heaven and earth, the spiritualisation of matter.

The square is symbolic of the manifest universe, having emerged from the void. It is the macrocosm. We are a microcosm.

Pythagoras divided the chart into three levels – with a hidden 4th.
The chart can be used to read character and to identify where we are in the 9 Year Cycle of growth and development.

There is a close link between numbers and the astrological planets.

zero is associated with potential. No planet corresponds, with the possible exception of transformational Pluto co-ruler of Scorpio – a portal and gateway to other dimensions.

1 corresponds with the Sun, the ruler of zodiac sign Leo. 1 and the Sun are symbols of spirit, life force, individuality, the higher self. It is not a Life Path number as Pythagoras considered it divine. It signifies the start of a new cycle.

2 corresponds with the Moon: the soul, emotions, personality, subconscious, psychic receptivity. People ruled by the Moon are at their best working in partnership or in a team. They must avoid becoming dependent and should take the lead as and when appropriate. 11 is a higher expression of 2. Life Path 11s have great spiritual gifts. When living positively they are leaders in the new age. If not they can be ruled by their emotions and drift through life.

3 corresponds with Jupiter: it governs long term memory and is the gateway to the Mind. There is intellect, quick wits and optimism in Life Path 3. They excel at strategic analysis, planning and writing. Patience with the less able may need attention.

4 = Uranus the planet associated with the rebel, the revolutionary and freedom fighter. There is intuition, willpower, and at the higher levels enlightenment in 4. It is the planet of the new age and with Master Number 22 (also resonating with 4) aims to build a fairer (utopian) society. 22s have the gifts of 11 combined with practicality.

Gautama Buddha became enlightened sitting under a ‘Bodhi Tree’ (enlightenment takes place in the body! on the physical plane). Bodhi leaves are heart shaped (enlightenment requires the heart to be open and active). In the 9 year cycle of development 4 is a low point emotionally and materially, but only when viewed from the perspective of the lower self, the personality. Ruling 4 people are practical and have a strong will to achieve. They have the ability to manifest the empire of the soul.

5 = Mercury is reasonable, curious and questioning. They are adept with words, good communicators, effective networkers and sales people. They need to be free to express their emotional self. Routine jobs rarely satisfy. They need to avoid change for change’s sake.

6 = Venus is associated with love, money, creativity, balance, harmony, and the desired. Ruling 6 people bring peace, love and beauty into the world. They are attuned to nature and earth energies. On the downside they can spend too much time thinking, not doing, and miss opportunities for self development.

7 = Neptune is perhaps the most mystical Life Path number. It is associated with cosmic love, compassion, selfless-action and sacrifice. It is the crowning glory on the Tree of Life (kabbalah). It is said the circle (360) divided by 7 produces a number (51.4) that grounds stellar energies when used in sacred geometry. When not living positively Ruling 7s can lose faith or make life harder for themselves by not making changes when necessary.

8 = Saturn is associated with karma and mastery of time and space. In Life Path 8s there is common sense, understanding, self reliance, responsible action and a willingness to serve the less fortunate. Saturn is the ‘Gateway to the gods’, to self realisation and cosmic consciousness. On the downside rigid thinking, unexpressed feelings and anxieties should be given conscious attention.

9 = Mars is associated with action, desire, mental power and reckless aggression or with the sacred warrior. Life Path 9s are born to imagine Utopia and then use their courage and powerful minds to make it happen. They should take care not to overpower the weak.

10 is implied through the combination of 1 (spirit) and zero (matter in potential). It is a symbol of completion of the individual journey. To Life Path 10s success comes easily. So easily they don’t necessarily study a subject in depth.

Examples of how to apply numbers and planets in a character reading:

Queen Elizabeth’s Life Path number is 7, which resonates with Neptune –
the planet of cosmic love with a highly refined frequency. Neptune is associated with the mystic, with idealism and selfless sacrifice to a cause.
The queen was born under Taurus and so her ruling planet is Venus,
resonating with number 6.

Venus is the planet of love, peace, and beauty. On the physical plane she radiates peace and harmony. In her horoscope Venus is in Pisces – the zodiac sign ruled by Neptune putting further emphasis on the inner meaning of 7.

(The queen also has the Moon in Leo – the moon indicates her subconscious pre-disposition and Leo is the royal sign – suggesting she has ruled in a past life.)

JF Kennedy born 29 May 1917. 2+9+5+1+9+1+7= 34. 3+4=7
Also a Life path number 7 prepared to live a life of selfless sacrifice for an ideal. We can assume his ideal was the same as the Founding Fathers – Liberty and the pursuit of Happiness. He was born to raise the consciousness of humanity and in his way he tried to wake them up to the reality of what was happening in the USA. He was assassinated 6 months after giving his controversial speech warning the American people of a ‘conspiracy against their interests by a military industrial complex’.

He was born under Gemini so he expresses the Neptunian frequencies in a very different way to the Queen. Gemini is ruled by Mercury (5) the ‘messenger of the gods’, a trickster and free spirit. Mercurial characters are masters of oratory and can be like Humpty Dumpty – when they say a word it means what they say it means – not necessarily factual. Some say JFK fibbed his way to become president, but with the best of intentions.