What I know most surely about morality
and the duty of man I learned from football.
Albert Camus

Football has a long history. The ancient Chinese played a form of the game. 500 BC the Mesoamericans vulcanised rubber balls with the players’ goal to manipulate them through a square hole using only their hips and feet. It was a highly ritualised event played by royals and the elite for the pleasure of the gods, the ball symbolised the Sun, the square symbolised the Earth and the stadium, access to the Underworld. Success or failure could mean life or death. Among the New World riches Hernan Cortes took back to Spain was a team of ball players in full kit to entertain the King. However, it was probably in England where the modern game of football – with the prize a silver Cup rather than a head on a stick – took hold of the public subconscious. 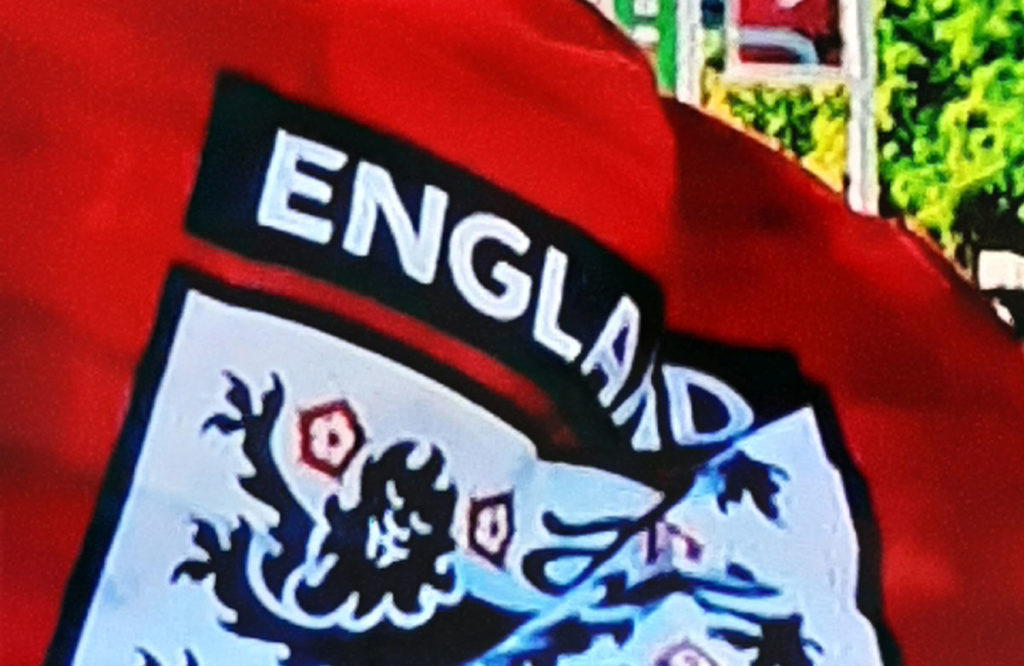 After 55 years of not winning a major tournament the exhortation from Prime Minister Johnson, the plea from Prince William, and the instruction from the Queen was ‘bring the football trophy home’. All necessary preparations were made. Covid-19 mask restrictions were lifted to allow football crowds to do what church choirs couldn’t. England bent the knee for ‘Black Lives Matter’ despite boos from the crowd and opposition from Home Secretary Patel. A special Bank Holiday was promised to spur on the team. Sunday opening hours for pubs were extended to jolly up the nation. 67,000 fans were vetted into Wembley stadium. The ticketless, suitably jollied-up stormed the turnstiles scattering Security, sitting on stairs, fouling the aisles, and displacing the disabled. Southgate gave a pre-match rallying cry invoking the Blitz spirit and reminding folk that Italy, as well as Germany had history. Populist slogans, Nationalism, Tavistockian motivational mantras, Us versus Them, The Good the Bad and the Other were systematically rolled out and anyone off-Agenda faced victimisation or a trip to Coventry.

The football gods were not amused. The match didn’t follow the script and no political capital was gained as the match slipped away from Johnson. In the aftermath racial abuse was aimed at the 3 England players who missed penalties. Marcus Rashford, a community hero for his tireless efforts to take on the Establishment and feed the Mancunian poor had his mural defaced. Rashford did apologise for missing but refused to apologise for being a sovereign human being. ‘It was unforgivable’ said Southgate. Mings blamed Priti Patel for stoking social division. Prince William was disgusted. Still, the elite gave Southgate the thumbs-up and the misser of crucial penalties himself lived to fight another tournament.

Within 2 minutes England took the lead. Then shut up shop. Kane didn’t have a shot. Italy scrambled an equaliser from a corner kick in the 67th minute. For the rest of the game England seemed to be playing for penalties. With 2 minutes of extra-time remaining Gareth Southgate activated his penalty shoot-out plan and sent on 3 specialists to take the vital kicks. All 3 substitutes, perhaps understandably disappointed that they were excluded from England’s starting line-up, nervously stepped forward in the evening rain, all missed. It was Southgate’s one mistake of the tournament. With just a little less rationality, a little less tactical planning, a little less statistical analysis and a bit more logic – astrologic – he would have been dubbed into English history. Nevertheless he had exceeded expectations. He reached the final. Took the lead and was only 3 kicks away from glory. England had over-performed. Gareth had overcome England’s historic problem:  no cohesion. How?

Just to remind you: Southgate was trying to emulate Sir Alf Ramsey who famously said in justifying his selection of Jack Charlton, rather than one of the better centre halves, I don’t necessarily always pick the best players. I have a pattern of play in my mind and pick the best players to fit the pattern.

That elusive ‘pattern’ is revealed astrologically. Essentially, Sun/Mars connections in player astro-profiles hold the key to optimum performance. The Sun symbolises the essential character and Mars, how the Self expresses itself physically, in the field. Players who share the same Sun and or Mars positions instinctively understand each other, have uncanny abilities to anticipate what their team mates will do and consequently play flows seamlessly. It means teams are better than the sum of their parts. In other words they over-perform.

The best teams, yes they have good players but they also have the best cohesion. There are other factors which make a difference, for instance the manager and captain should be on the same wavelength:

Players should be on form and injury free – in particular, Saturn and Chiron transits must be taken into account well in advance of any tournament. Astrolocality is an important factor and should be consulted – certain players play better in certain locations! All that said, England was the best team in the tournament and could have, should have won.