At 11:00 pm on the 31st January 2020 the UK left the European Union. The chart for Brexit has a poetic resonance with the conquest of the English by the Duke of Normandy and his coronation on the 25th December 1066. 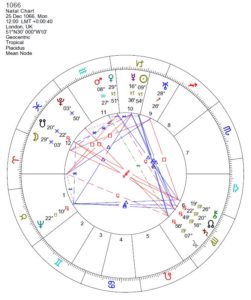 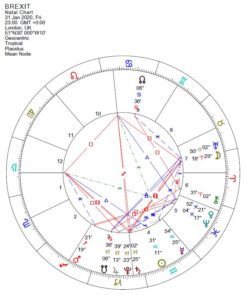 When considering the horoscopes of nations or national events (mundane astrology) the planets are interpreted in particular ways. As a general rule the Moon represents the common people. The Moon’s sign, aspects and house position tells their story. The Sun is symbolic of the ruler – king, queen, president. Saturn symbolises the government. Venus shows the nation’s wealth, or lack of it. Mars needs no explanation.

In the 1066 chart the Moon is in the last degree (29) of the last sign (Pisces), and in the last house (12th). The last degree of the last sign strongly emphasises the end of an era, a culmination and final reckoning. Together with the 12th there is a resonance with enslavement, hospitals, confinement and the subconscious. Pisces is the sign of illumination, spirituality, bliss and oneness but, on the negative side, it represents illusion, delusion or loss of meaning and despair. The English had been defeated by Duke William of Normandy, a tyrant, and their lands seized (‘A hard man was the king…He was sunk in greed and utterly given up to avarice. Alas!’ Anglo Saxon Chronicle). It was a shock defeat (Uranus, 9th House, square to the Moon), England was wealthy and well defended. It was deeply wounding to the national psyche (Chiron opposing the Moon from the 6th house). Would, could, the peasants ever recover? In 1065, 70 per cent of the population were self-sufficient land owners. In the next five years, following the Harrying of the North, the king and his barons owned all the land. Those English who didn’t manage to emigrate were forced to work for their conquerors for less than subsistence wages.

In the Brexit chart we can see that the Moon (the common folk) is less powerless in 2020 than it was in 1066 (less than 1 per cent of the population now own 70 per cent of the land rather than all of it) with its position in the 7th House (the open enemy), in Aries (the Warrior sign) and now aligned with, rather than conflicted by, Uranus (the awakener and revolutionary), it is set squarely against Saturn (parliament). With no major aspect between the Moon and Sun the people have no particular beef with the queen. However, the prospects for the Union are not favourably indicated. Economic indicators are also less than optimal, but with the Moon’s North Node (intention/direction) in the 9th House the masses genuinely want to reach out to the wider world. The prospects for a more idealistic, environmentally responsible and spiritually aware nation are clearly shown (in pre-history England was a centre of esoteric wisdom and a global beacon of spiritual light). Once the accumulated Norman karma is worked through then what remains of the UK (Scotland and Ireland will have the choice to depart) will enjoy the freedoms, esteem, and social benefits of a new golden age.